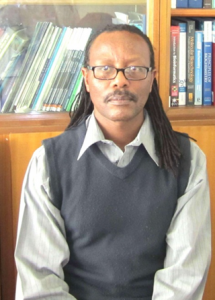 Dr Ntwasa gained his BSc Hons in Microbiology from the University of Cape Town. He gained his PhD at Cambridge University, where he studied the early development of the Drosophila fruit fly and Lipid Modification of proteins.

Dr Ntwasa is interested in the molecular basis of development and signal transduction. He is investigating the role played by a novel family of proteins characterised by a highly conserved N-terminal domain whose function is not yet defined. This domain now called Domain With No Name (DWNN) This protein, was identified during a screen for genes involved in apoptosis. We investigate the biological function of this gene using the fruitfly (Drosophila melanogaster) as a model organism. This project is conducted by MSc and PhD students and funded by CANSA and the National Research Foundation.

Dr Ntwasa is also interested in innate immunity and bioprospecting. The Toll signaling pathway is responsible for the establishment of Drosophila dorso-ventral polarity in early (embryonic) development and for immune defence in later life. Activation of this pathway in the larvae and adults results in the production of antimicrobial peptides such as drosomycin that kill the invading microbe specifically. Dr Ntwasa’s team studies the signaling pathways controlling the immune response. His team also searches for new antimicrobial peptides.