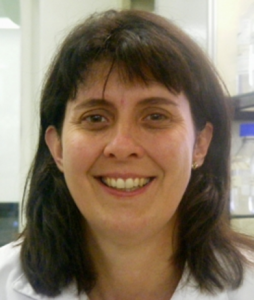 Dr Bridget Crampton completed her BSc and BSc Honours at the University of the Witwatersrand, before moving to the University of Cape Town to read for a Masters degree in Molecular Microbiology. Thereafter, she worked at CSIR Biosciences for twelve years in the Plant Biotechnology group where she was involved in various projects including micropropagation of indigenous plant species, Agrobacterium-mediated transformation of legume species, and expression of pharmaceutically important proteins in plants. Whilst at the CSIR, she was afforded the opportunity to do a PhD, which she obtained from the University of Pretoria in 2006. The focus of her PhD project was to elucidate defence response mechanisms in pearl millet, an indigenous African crop. She employed various gene expression technologies including suppression subtractive hybridisation, cDNA microarray expression profiling and quantitative real time PCR to examine pearl millet’s response to the defence signalling compounds methyl jasmonate and salicylic acid, as well as infection with Puccinia substriata, the causal agent of rust.

She was rewarded with two prestigious awards by her peers at the South African Association of Botanists (SAAB) conference in 2008. Dr Crampton clinched a medal for the best plant-related PhD thesis in Africa and the best poster award for a poster resulting from her research in plant biotechnology and physiology.

Dr Crampton is currently a post-doctoral research fellow in the Molecular Plant Pathogen Interaction Group at the Forestry and Agricultural Biotechnology Institute (FABI). Her current research interests are centred on grey leaf spot (GLS) in maize. GLS, caused by the fungus Cercospora zeina, is an important emerging threat to maize production in southern Africa. She is part of a project team that is studying the molecular basis of quantitative resistance to GLS in maize through the application of eQTL analysis. Candidate genes contributing to disease resistance will be tested for function through over or under expression in transgenic maize. In addition, she wishes to understand maize’s early response to C. zeina through infection with C. zeina expressing a fluorescent protein. This will enable her to specifically isolate cells directly in contact with the fungus as opposed to the standard approach of studying gene expression in a whole infected leaf.