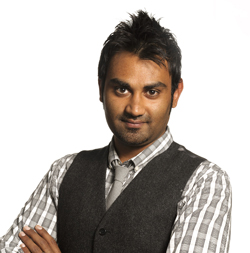 Wits is very proud to hail one of its own young researchers, Dr Bavesh Kana, who was selected as one of the recipients of the inaugural Howard Hughes Medical Institute’s (HHMI) inaugural International Early Career Scientist (IECS) awards – one of only two South Africans.

The awards have given an important boost to top young biomedical scientists from 12 countries at a critical time in their careers.

Kana is Senior Research Scientist and Head of Unit in the DST/NRF Centre of Excellence for Biomedical TB Research at Wits and the National Health Laboratory Service and completed his Doctorate in 2004.

The 28 IECS recipients, chosen from 760 applicants, represent a wide range of disciplines from neuroscience to virology to plant science.

The awardees drawn from China, Portugal, Spain, Argentina, Brazil, Chile, Hungary, India, Italy, Poland, South Africa and South Korea will each receive
$650 000: $100 000 a year for five years plus $150 000 the first year for major equipment purchases and other investments (an additional supplement will go to their university or research institution). The funding will start next month.

The HHMI is one of the largest private funding organisations for biological and medical research in the United States.

Kana accepted a postdoctoral fellowship at the Molecular Mycobacteriology Research Unit (MMRU) based at the University after completing his doctorate.

His research focus includes the identification and validation of novel drug targets for tuberculosis (TB) and his work entails the study of important metabolic pathways in Mycobacterium tuberculosis, the causative agent of TB and their relationship to virulence and human disease. His principle interests are in further understanding bacterial dormancy and mechanisms of mutagenesis and how these relate to Latent TB Infection (LTBI) and the emergence of drug-resistant strains, respectively. The major thrust of his current research is the study of LTBI. It is estimated that two billion people worldwide are infected with latent TB and that these individuals carry a 10% lifetime risk of developing active disease, which will eventually require chemotherapy.

As such, as long as LTBI remains an unattended problem, society will continue to face a massive and ongoing future burden of TB. Bacteria in LTBI are characterised by impaired culturability, which is reminiscent of dormant bacteria in culture. Consequently, an understanding of the bacterial and host factors that contribute to the establishment and maintenance of this dormant-like state is of utmost importance for the development of new interventions that target LTBI. Kana has been involved in studying resuscitation promoting factors (Rpfs) in M. tuberculosis and their roles in dormancy, peptidoglycan remodelling, growth, pathogenesis and recrudescence during infection.

His other active area of interest is the study of the mycobacterial electron transport chain, specifically the role of hypoxic and anaerobic respiratory complexes in energy metabolism under stressful conditions and during non-replicating persistence.

During 2009, Kana completed a large study on characterisation of the role of Y-family DNA-polymerase-encoding dinB homologs in M. tuberculosis. Members of this family of DNA polymerases have been implicated in DNA damage tolerance and mutagenesis in other organisms. In contrast, Kana’s study revealed that the putative DinB1 and DinB2 DNA polymerases in M. tuberculosis do not play an important role in DNA damage tolerance, spontaneous mutagenesis and virulence.

His future plans include further studies on LTBI and the role of Rpfs in TB infection and transmission. He would also like to expand his work into the molecular epidemiological characterisation of TB infection in Gauteng and surrounding regions. Kana is also keen to play a more active role in the discovery of new anti-tubercular drugs that have novel modes of action through participation in large international consortia focused on such activities. He is the recipient of a Friedel Sellschop Award, the Medical Research Council Career Development award and is a National Research Foundation rated researcher.