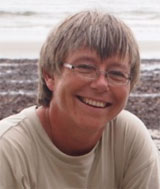 The Commonwealth Forestry Association has bestowed Prof Jolanda Roux with the Queen’s Award for her contribution to forestry. The award, which recognises the achievements and supports the future work of an outstanding mid-career forester, comprises a certificate, a cash prize and a travel grant.

Prof Roux is from the University of Pretoria’s Forestry and Agricultural Biotechnology Institute (FABI), and has been recognised for her exceptional contributions to forestry with an innovative approach to her work.

Her research interests focus strongly on fungi and bacteria resulting in disease and death of woody hosts. Most of the research has been focused on the diseases of the commercial plantation forestry species in South Africa and other African countries, namely Acacia mearnsii, Eucalyptus spp. and Pinus spp.

With her appointment in the Department of Science and Technology/National Research Foundation Centre of Excellence in tree health biotechnology (CTHB), Prof Roux has now become much more involved in investigating the health of native tree species in Southern Africa. She is especially involved in the in-field diagnosis of disease and pest problems and the identification of the causal agents using morphological and molecular techniques.

Tree health management is strongly dependent on collaboration between countries and knowledge of the pests and diseases occurring in a country. Through collaboration with other African countries, foresters are trying to improve their capacity for tree disease management on the African continent. This is being done through regular survey and research visits to other countries, training of postgraduate students from other African countries and through participation in the recently established Forest Invasive Species Network for Africa (FISNA).

Prof Roux has described receiving the Queen’s Award as a great honour and hoped that through it, more focus can be placed on forests and forestry on the African continent. She said that native forests in Africa are disappearing through deforestation, fires and climate change, and plantation forestry also faces similar challenges, including threats by pests and diseases.

“Trees are the ‘lungs of the earth’, but unfortunately we have not been treating ‘our lungs’ as well as we should. We need serious efforts to protect our trees and this can only be done through involvement by all of us and an increased awareness amongst all people”, said Prof Roux.