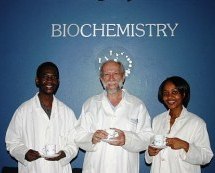 Pelly Malebe’s research on helping plants withstand drought is personal as well as scientific. She grew up in South Africa’s drought-prone northern province of Limpopo, where crop failures are frequent.

If the affected crop is food for family consumption, the result can be hunger. If it is a crop for trade or export, the loss of earnings can also mean too little food on the family table, as well as threatening commercial farmers, both large and small.

As a doctoral student at the University of Pretoria, Malebe is studying the drought-survival mechanisms of tea plants under stress – and has identified a DNA marker for those plants more able to withstand drought. “This can be used to identify suitable drought-tolerant cultivars to benefit the commercial tea industry,” she says.

In effect, Malebe has found a shortcut that suggests that a particular tea plant will tolerate drought conditions, without having to wait to see if and how the plant grows. Happily, the drought-tolerant plants can adapt to excess moisture, which means they can survive rainy weather as well.

Malebe’s research is supported by RISE, the Regional Initiative in Science and Education, aimed at building capacity for science research and teaching in African universities. Funded by the Carnegie Corporation of New York, a charitable foundation, RISE works through a series of thematic networks, including Sabina, which stands for the Southern African Biochemistry and Informatics for Natural Products Network.

Before he was accepted into the Sabina programme, Mphangwe had been working as a plant breeder for the Tea Research Foundation in his home country of Malawi, where tea provides about 30 percent of the country’s foreign exchange and about five percent of the world’s tea crop.

Since one of Rise’s goals is to enhance scientific skills among scientists in mid-career, Mphangwe was able to take leave from his job to become part of the Sabina programme. In the lab, he is probing genetic markers to identify cultivars more adaptable to African growing conditions and more resistant to drought, insects, diseases and low temperatures.

“In Malawi, Zimbabwe and Zambia, the main work on tea is being carried out at research stations, so we tea breeders are still continuing to go into the field and visually assess promising cultivars,” Mphangwe said. “I hope eventually to develop cultivars with good off-season growth, so as to extend the growing season.”

Once he earns his PhD, Mphangwe plans to return to Malawi to work with the Tea Research Foundation of Central Africa. This non-profit organisation is funded by Malawi and Zimbabwe tea growers to improve technologies. Some of the tea cultivars it has developed are also grown in Tanzania, Kenya and Uganda, as well as outside Africa.

Ceamellia sinensis, the biological name for the plant that produces black and green tea, is grown in some 50 countries and is the world’s most widely drunk beverage after water. Apostolides says tea production in Southern Africa is growing at about 20 percent per year, so the region could challenge India for first place in tea production by about 2020. “India produces 900,000 tons of tea per year,” he says, “while Sri Lanka and Kenya, which are always competing for second place, produce 300,000 tons each, and all the African countries combined produce about 400,000 tons, so as a region we are in second place.”

Pelly Malebe’s work has included finding a feasible way to send cultivars to research labs. “Developing countries lack skills for the isolation of genetic material,” she says. “What is needed is a simple leaf-drying method so that the tea leaves can be transported to laboratories where genetic material can be extracted and usable genomic DNA can be isolated and stored.”

After testing various methods of drying tea plants – blanching, pressing, freeze drying and placing it in bags with silica gel – she determined that using silica gel in sealable plastic bags gave the best results. That encouraging finding could point the way to a simple methodology for obtaining and storing genetic material, applicable to other products and places.

Before publishing her research on DNA markers for drought resistance, Malebe conferred with Apostolides. The scientists had to choose whether or not to patent the cultivars. She and her advisor decided that she would write up the research results without claiming them as intellectual property. So this breakthrough from Africa will soon become free knowledge to the international scientific community.