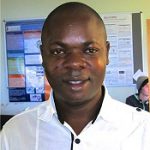 Benjamin Kumwenda from Malawi began his scientific career studying undergraduate biology at the University of Malawi – Chancellor College in Zomba. But as he made his way through the course requirements for his Bachelor of Science degree, he felt equally drawn to Computer Science, and took as many interesting CS courses as he could fit into his schedule.

“In this part of Africa people think that Computer Science is just about maintaining computers,” he said. “But my interest was in the application of Computer Science to my major understanding of genes, genomes, and proteins to solve biological and medical problems. These are intensively data-driven activities that require a lot of computation.”

When he earned his Bachelor of Science degree at an honors level, the next logical step was to combine his two interests. He was able to do that at the University of the Witwatersrand in South Africa, where he moved to study computational biology at the master’s level. His work there gave him a solid background in bioinformatics, and the opportunity to join the RISE-SABINA network at the University of Pretoria nearby. There he found a kindred spirit in Prof. Oleg Reva, a native of the Ukraine and specialist in bioinformatics who welcomed Benjamin and his enthusiasm for the subject.

Benjamin’s work at Pretoria does not require huge computing power, but his dual background of biology and computer science is well suited to the challenges of bioinformatics. These include the study and modeling of individual genes and whole genomes. The knowledge of these complex systems can open the way to the design of valuable new chemicals for industry and drugs for medicine. For example, detailed knowledge of protein structure can allow the design of a drug that will bind tightly to a site and prevent another agent, such as a disease organism, from binding to the same site and causing disease. In the same way, a researcher might study the genome of a little-known bacterium and identify a genetic trait that is known from other organisms and that might be useful for industry.

When Benjamin arrived, he had several options for moving ahead at the PhD level. One was to concentrate his work in the area of natural products, which is the main thrust of SABINA. But he knew that Prof. Reva was working on bacteria, and he saw an opportunity to become expert in the exciting new area of thermophilic bacteria and its many practical applications.

Once a curiosity, this special class of living organisms (“thermophilic” derives from the Greek for heat-loving) is now drawing attention from researchers around the world. Benjamin is interested partly in discovering how they are equipped to survive at such high temperatures; most species function best at temperatures somewhat above 50 degrees Celsius (122 degree Fahrenheit), but some of them, often called “extremophiles,” flourish at temperatures near and sometimes above the boiling point of water, 100 degrees Celsius (212 degrees Fahrenheit). These bacteria are familiar to many travelers who have visited Yellowstone National Park in the USA or other sites of geysers, fumaroles, or hot springs where these organisms thrive and create colorful patterns and textures against rocky backgrounds.

At a more practical level, he is also learning how these bacteria synthesize proteins, and how those proteins, especially the enzymes that catalyze chemical reactions, might be useful. Many industrial processes, such as generation of biofuels, occur most efficiently at high temperatures, where many bacteria do not perform well. Thermophilic species are the exception in preferring hot environments, and much sought-after as powerful catalytic tools. The higher the temperature, the more efficient their enzymes tend to be, and the faster their reactions with other chemicals.

Some thermophilic species are already proving valuable in producing paper, dairy products, clothing, and other products. A goal in making shoe leather, for example, is to make the leather soft. This can be done with enzymes that partially break down the skins of the leather, and the enzymes of thermophilic bacteria can do it fastest. In the same way, the food industry uses enzymes to tenderize meat, and the laundry industry uses thermophilic bacteria to make detergent more efficient. In addition, the bacteria has good ability to clean up water than has been polluted by heavy metals such as chromium, iron, and zinc, and to reduce the toxicity of heavy metals in food.

Benjamin has been working in particular on South African species of bacteria, seeking to  understand them in the context of others that have been studied previously. He is especially interested in finding genetic patterns that determine thermo-stable behavior at high temperatures. This exercise in comparative genomics helps him identify sections of the genome that seem likely to be useful for industrial needs, especially new ones.

More specifically, his project focuses on the completely sequenced genome of the bacterium Thermus scotoductus strain SA-01, which was isolated at a depth of 3.2 kilometers in a goldmine at Witwatersrand. The goal is to compare its genome against other bacteria and understand its features. He has examined the enzymes it produces and determined the properties of those enzymes, especially the temperatures at which they can function efficiently in the laboratory.

“The theory,” he said, “is that as proteins are being created, they fold into a structure that is thermodynamically stable. This means that the most stable structures are the ones that expend the least amount of energy as they fold. The energetic features of various configurations of proteins are already known, so when we find the protein of thermophilic bacteria fold in a certain way in nature, we calculate the energy and know that will be stable. Then we have a good idea of what properties, or chemical reactions, it will have, and think about designing enzymes that do the same things.”

Benjamin started his PhD work in April 2010, and expects to complete his degree shortly. He has already completed a paper on his studies for BMC Genomics apr 29, 2009 – an open access, peer-reviewed journal.