The early success of Dr Stephanie Fanucchi leaves most people astounded. This young biologist had already completed her PhD when she joined the CSIR in 2011, her first job. Hardly three years later and a few months before her 29th birthday, she was part of a team of South African researchers who published a ground-breaking study about gene regulation in Cell, one of the world’s most prestigious research publications. 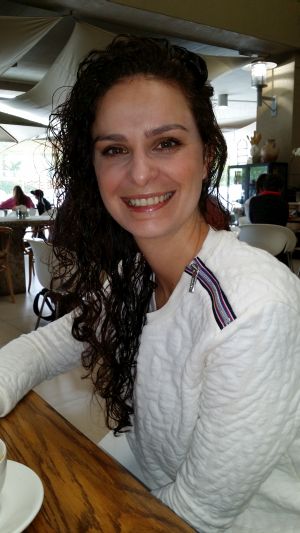 The group showed that gene activity is a consequence of genes engaging in physical contact in three dimensions, also known as ‘gene kissing’.
“This was a fundamental observation and has broad implications for how scientists understand gene regulation. Many diseases are caused by aberrant gene regulation and activity. It is ultimately our genes that dictate how cells in our bodies grow, so understanding how genes work will help scientists to find medical cures,” Fanucchi explains.

State-of-the-art microscopes, custom-built in South Africa by the CSIR’s gene expression and biophysics group under the leadership of Dr Musa Mhlanga, were an important tool for imaging the ‘gene kissing’ interactions. As these microscopes are able to achieve single-molecule resolution, they are able to detect the activity of a single gene. Then using genome-editing tools – nicknamed ‘molecular scissors’ – the team was able to cut DNA at precise locations to prevent genes from making contact. This led to the registration of a new patent.

Being part of this work required immense commitment and Fanucchi needed to make some difficult decisions about her personal life, which may resonate with women scientists globally.

“I have not felt that being a woman has limited my career, but nor has it helped. There is a perception that some of the old-school scientists don’t really believe that men and women are intellectual equals, but I have not encountered that in our research group.

“When we worked on the Cell paper, the hours were crazy. This is not an eight-to-five job. We were trying to answer a difficult question and there was no formula for how to do it. We had to process an enormous amount of information and therefore we often worked through the night.”

“Perhaps herein lies the challenge women still face pursuing their academic and then scientific careers: One has to make difficult decisions relating to your personal life, for example to postpone starting a family, like I did.”

Fanucchi almost considered a career in dancing, another passion, when she was in high school. Coming from an academic family, she was encouraged to go to university. After completing matric in 2003, she enrolled for a BSc degree at the University of the Witwatersrand, followed by an honours degree in biochemistry and cell biology. Thereafter she enrolled for a Master’s degree.

She soon upgraded this to a PhD and as she was completing her studies, was recruited by Dr Mhlanga, who had joined the CSIR in 2008, after completing a post-doctoral fellowship at the Institut Pasteur in Paris in the laboratory of nuclear cell biology. “I was thrown into this entirely new field. Those who think that biology is a narrow field are mistaken. It is incredibly broad. It was a steep learning curve for me.
“We were focusing on several projects in parallel. The work was cutting edge and high risk, meaning that we had to put in a lot of work that may not have paid off. This often happens in high-risk science, but in our case led to the Cell publication.”

According to Fanucchi the fact that she had completed her PhD by then was an advantage. “PhD projects can require a very structured research environment. Having completed mine, I was free to do more high-risk science.”

Fanucchi’s advice to other young scientists is to be very committed early in their careers.
“I put my head down for ten years to get where I am now. Also, it is extremely competitive at this level with not that many positions available, so you have to excel, you cannot do anything half-heartedly. Our research group leader (Mhlanga) is a world-class scientist, one of the best to work with, but he does not believe in mediocrity. He always says that we use tax payers’ money to do research and have to be very serious about what we do.”