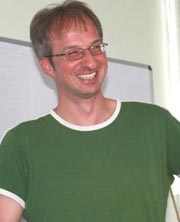 Sven Bergmann is an Associate Professor at the University of Lausanne in the Department of Medical Genetics, and is affiliated with the Swiss Institute for Bioinformatics.

On 9 April, Sven visited the Bioinformatics and Computational Biology Unit at the University of Pretoria, and gave a talk entitled “A Modular Approach for Integrative Analysis of Large-scale Gene-expression and Drug-Response Data” covering work which was published in Nature during 2008.

Sven is originally from Germany, but spent many years at the Weizmann Institute in Israel studying theoretical particle physics and obtained his PhD in 2001 before later joining the University of Lausanne. His current research involves the design and application of novel algorithms for the analysis and visualization of various types of large-scale expression data generated using microarrays.

The goal of his team is to thus process different types of data in order to reduce their complexity with focusing on the integration of genotypic and phenotypic datasets from mammalian cells or clinical studies.

Sven publishes regularly in genome-wide association studies and has been author / co-author on a variety of Nature and Science papers.