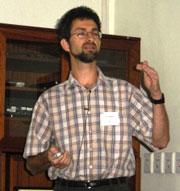 Following on the success of the first scientific meeting of the Regional Plant Biotechnology Forum at the University of Johannesburg earlier this year, the Forum recently held another meeting on 15 October at University of Pretoria under the auspices of the ACGT.

Sponsored by Bayer Crop Science, the meeting was hosted by ACGT partner, the University of Pretoria, and organised by Dr Sanushka Naidoo of the University’s Department of Genetics. ACGT Director, Dr Jane Morris – who conducted the welcome – says that the objective was “to bring scientists together with the aim of looking at areas where there are opportunities to collaborate”. Participants discussed the various scientific techniques that they are employing, which of those they have in common and how better to share information going forward.

Scientific presentations covered research which included plant cystatins and insect resistance as well as targeted expression of an anti-HIV lectin in tobacco. A number of poster presentations were also made by students and other researchers.

With representation from all three ACGT partner institutions as well as associates, University of Johannesburg and the Agricultural Research Council, valuable input was gleaned from participants during the break-away discussion sessions.

The next Regional Plant Biotechnology Forum meeting will be hosted by CSIR in March 2011.