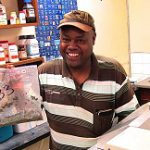 Godwil Madamombe, a native of Zimbabwe, earned his bachelor’s degree in crop science and his master’s degree in crop protection at the University of Zimbabwe, based in Harare. During his first major crop protection project, he worked for the government as a plant pathologist. He was tasked with conducting research on many common and injurious diseases, including Fusarium bark disease, coffee berry disease, leaf rust and others; he used cultural, biological, and host plant resistance and chemical methods in developing integrated disease management programs.

A significant part of his MSc studies were aimed at determining the extent to which smallholder farmers planted soybean seed that had been kept from the previous year’s crop. The reason they retained seed was that they could not afford to buy fresh seed each year, and they would usually continue to plant the retained seed for as long as it lasted. But this habit brought many drawbacks. The most direct of these was the introduction of seed-borne pathogens to the next year’s crop. In addition, while these “free” seeds did germinate, they usually lost more and more of their genetic disease resistance and vigor during each successive year. For example, Godwil found that most farmers following this practice would lose between 15 and 30 percent of their crop during the first year. By the third or fourth year, the yields would be too low to support the farmer. At that point, unless the government provided new seed for free, they would have nothing to plant. Sometimes a seed company would bring them new seed, but they had to agree to sell their entire crop back to the company at a low price, and also to pay for transporting the harvested beans to the company.

“We offered the farmers herbicides and fungicides to reduce the losses,” said Godwil, “but they couldn’t afford them. We felt very helpless. All we could do was to recommend keeping the fields clear of weeds, drying the seed they harvested, and storing it in a moisture-free environment, which they usually didn’t have.”

After completing his master’s studies in 2003 he was offered a job in Zimbabwe with the Tea Research Foundation of Central Africa (TRFCA). With some variation by year, Zimbabwe is the third-, fourth-, or fifth-largest tea producer in Africa, producing about 18,000 tons of tea annually – more than Zambia or Mozambique, but less than the 40,000 tons of Malawi and the 345,000 tons of Kenya, the world’s third-largest producer after China and India. But Zimbabwe tea is known for high quality and high yields, and as the country struggles to emerge from a period of political strife, its growers are eager to maintain that reputation.

During his work for the TFRCA, Godwil saw that a significant problem for the Zimbabwe tea industry was the shortage of labor, which had become a problem in nearby Malawi as well. The tea industry had long depended on labor from Mozambique, which was plentiful during the years of civil war there, from 1977 to 1992. Many workers sought to escape the violence in Mozambique and were willing to work hard and cheaply in neighboring countries. After the war, however, these laborers were quick to abandon the arduous, low-paying job of picking tea in favor of jobs closer to home. The supply of labor declined, and tea growers were forced to turn to the mechanization of tea harvesting.

After using the machines for some time, the growers realized that their yields were declining, but they did not know why. Godwil was asked to search for the reason, and he quickly identified several problems. First, the machine harvesters were non-selective, taking the immature leaves/shoots as well as the mature shoots and in the process damaging the bush. However, the tea industry had no other option besides mechanical harvesting now that labor was either not available or, if available, more expensive than it had been during wartime. In addition, Godwil knew there were many other reasons for yield decline that were not understood. For example, the growers wanted to compensate for the reduced yield by making the plants grow faster and produce more mature leaves – but without losing flavor. This raised many basic questions of horticulture. For example, no one knew how much of the products of photosynthesis was going to the shoots and how much to the roots under mechanical harvesting. Also, growers knew that more nutrients are removed from fields through machine harvesting, but they did not know how much of the fertilizer was taken up by the roots and how much was taken up by the plant for shoot growth. Of the solid nitrate scattered between rows, how much was actually made available to the plant? During harvesting, how much of the fertilizer leached into the soil or was removed by different harvesting methods?

Through his work at the TRFCA, Godwil heard about the SABINA network in biotechnology and informatics, which was already involved in tea research from a genetic viewpoint. For example, SABINA students are searching for the genes that control drought resistance and other desirable traits. He was accepted in 2010 as a PhD student in horticultural science, gaining access to the advanced research facilities and expert researchers at the University of Pretoria and the nearby Council for Scientific and Industrial Research.

Godwil joined the RISE program in 2010 but had to delay his research in order to take several advanced courses in Pretoria. He was able to begin field work in Zimbabwe in 2011, visiting Pretoria every three months to consult with Prof. Zeno Apostolides, Dr. Nicolette Taylor, Dr. Eyob Tesfamariam, and other mentors and colleagues. In the lab, he is about to do the kinds of complex biochemistry not possible in the field, such as starch analysis. He has access to such instrumentation as centrifuges, a photospectrometer to measure starch level, ceptometer to measure the amount of light reaching the tea plant, photosynthesis system to measure the rate of photosynthesis with the tea bush canopy, sensitive scales and pH meters, and a controlled temperature water bath. He has faced numerous logistical delays, including the slow arrival of new equipment and implementation of reliable weather station tracking on the tea farms. He also needs to obtain data through the full tea pruning cycle, which spans three years. But he has been cleared to extend his research to June 2013, and he is optimistic that it will bring value to the tea growers. At a recent professional presentation on his work at the 2nd All-Africa Horticultural Congress at Skukuza,  Kruger National Park, attended by horticultural experts from all over Africa, his presentation won first prize.