The RISE (Regional Initiative in Science and Education) recently brought together students, academics, administrators and government representatives from its five member networks for its 2010 Conference. The Meeting was organised by the ACGT office and held from 5 to 8 October in Benoni, Gauteng.

The ACGT partner institutions are a part of one of the five RISE member networks – SABINA (Southern African Biochemistry and Informatics for Natural Products) – which also include the African Materials Science and Engineering Network; the African Natural Products Network; the Sub-Saharan Africa Water Resources Network; and the Western Indian Ocean Regional Initiative in Marine Science and Education. 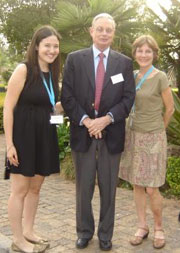 According to the ACGT Director, Dr Jane Morris, the discussions were focused mainly around “the science going on in the individual networks. In combination with that, representatives from the different institutions involved also gave talks about what they saw as the value of the RISE networks”.  In this regard, Wits University was represented by Prof Yunus Ballim (Deputy Vice-Chancellor: Academic); the CSIR by Dr Sibusiso Sibisi (President); and the University of Pretoria by Prof Anton Ströh (Dean, Faculty of Natural and Agricultural Sciences). The other SABINA member institutions – the Universities of Malawi, Dar es Salaam and Namibia and the Tea Research Foundation of Central Africa – also received high-level representation.

Aimed at sharing experiences and nurturing closer collaboration between African universities, the meeting succeeded in attracting a number of African academics, researchers and students as well as representatives of the governments of Tanzania and South Africa.

SABINA’s Academic Director, Prof John Saka from the University of Malawi, presented a progress report on the network, which expects to have produced eight MSc’s and 10 PhD’s by 2013. In his presentation, he set out SABINA’s objectives and went on to detail key achievements to date. These included the acquisition of European Union and the African, Caribbean and Pacific countries’ (EU-ACP) funding of £945000, and co-funding from South Africa’s national Department of Science and Technology. A knowledge management system – Virtual Research Environment, which currently links the University of Pretoria and Wits University – is also on trial before roll out.

In addition, four MSc students are expected to complete their studies in the first half of 2011 – of which half are to proceed to PhD studies in the second phase of funding – and joint degree programmes between SABINA member institutions are being discussed.

The RISE networks are nearing the end of their first 2.5 years of funding, with a view to funders’ approval of another three-year term to see current students through their degrees and to recruit new students. This will be ‘Phase 2′ of the programme. Phase 3 is currently envisaged as a move towards a more long-term sustainable funding model, based on additional supportive partnerships.