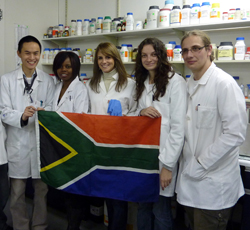 A team of South African students from the University of the Witwatersrand, in partnership with the synthetic biology research division of the Council for Scientific and Industrial Research, has made South Africa proud on the international stage at the prestigious International Genetically Engineered Machine (iGEM) competition in Amsterdam.

The team presented their project, dubbed ‘Bio-tweet’, at the recent regional semi-finals, which is hosted by the Massachusetts Institute of Technology. Amongst teams from the best universities in Europe, including Cambridge and Imperial College London, the only African team in the competition shone brightly. Team Wits-CSIR were selected as one of the top three finalists of the European regionals and were also awarded two of the ten special prizes awarded to top competitors in various categories. They will now be flying to MIT in Boston, USA next month to represent their country in the iGEM world championship final, an incredible and very sought-after honour amongst young synthetic biology researchers across the world.Wits Biotweeters Enzio Fok, Gloria Hlongwane, Sasha Reznichenko, Natasia Kruger and Bradley Marques.

The team’s faces glowed with excitement as they crossed the stage to collect their awards, after presenting their project to a packed hall of iGEM teams and judges. “This is so amazing,” said Natasia Kruger, one of the biology students on the team. “We have worked so hard this year. We had aimed to do well in the competition but never dreamed we would be in the top three, when the competition is so fierce!” Regarding representing South Africa in the finals, Gloria Hlongwane, another biology student, summed it up by saying: “We have faith in our ability to do South Africa proud. We will give it everything we have and show the world what South Africa has to offer.”

The competition is an annual event which began as an MIT initiative in 2004, as a way of introducing young students to the fascinating, interdisciplinary initiative of synthetic biology. Today, hundreds of teams from all over the world, including those from top institutions such as Cambridge, Harvard, Yale and MIT, get together each year to compete with the biological machines they have developed. Using input from disciplines such as biology, engineering, computer science, maths, medicine and the social sciences, they aim high, designing machines that are intended to solve mankind’s big problems: for example by detoxifying contaminated water or combating desertification.

The team’s Bio-tweet concept, a bacterial communication network that emulates social networking to facilitate speedy assimilation and exchange of information, caught the iGEM judges eyes and was noted as ‘an exemplary piece of work’. For the team, and their advisors from Wits and the CSIR, this represents a step forward in showing the world that South Africa has the talent and capacity to produce researchers who can hold their own against the best in the world.

The team has been generously mentored and supported by many individuals from within Wits and the CSIR. Dr Karl Rumbold in the School of Molecular and Cell Biology was also instrumental in ensuring that the team had great success at this premier competition.