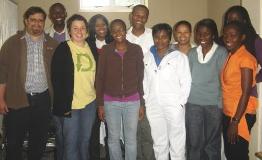 ACGT Centre Manager Dr John Becker and Research Intern, Jessika Samuels, recently visited the Agricultural Research Council (ARC) Biotechnology Platform’s new premises at the ARC’s Onderstepoort Veterinary Institute. In addition to viewing the facilities, the purpose of the visit was to provide support related to the audit and inclusion of the Platform’s equipment, staff and expertise on the ACGT database.

Headed up by ACGT Advisory Committee member, Dr Jasper Rees, the Platform now boasts a complement of four senior researchers and one specialist. It also successfully hosted its first public presentation in early February – based primarily on the next-generation Illumina sequencer that is housed there and currently in the process of being tested.

According to Dr Rees, the decision to establish the ARC Biotechnology Platform stemmed from one key question: “How do you capacitate the nine ARC institutes that are engaged in biological research when the investments needed are so huge?” The answer was the roll-out of a single platform that, through investment in technology and post-graduate capacity building, will provide core service activities, “while simultaneously linking to new research channels that will use the technology we invest in”, he says.

One such research channel is being led by Senior Researcher at the Biotechnology Platform, Dr Damaris Odeny. As an AWARD (African Women in Agricultural Research and Development) fellow, Kenyan-born Dr Odeny is looking at South African vegetables. Her research group is combining molecular and conventional techniques to provide what farmers need on the ground. “Most of these vegetables are neglected, despite the fact that they are nutritious, easily available and highly tolerant to environmental stresses. Farmers need crops like this but they don’t have access to quality seeds”. She adds that the combination of modern high-tech equipment, and the ARC’s historical role of linking directly to farmers makes the Platform the best place to be carrying out her work.

Sharing her views is fellow Senior Researcher, Dr Joseph Mafofo, who also sees a lot of potential internal benefit. In less than a week after its first public presentation within ARC, the Platform had already identified three new projects to embark on. “It turned out that there was benefit in almost every department, especially in the areas of bacteriology and virology”. He says the Platform will bring a major improvement to the way that science is being done within the ARC, which has largely been diagnostic rather than proactive. “There are already a lot of historic samples that can be characterised and put in databases, which is a much better way of monitoring the appearance of diseases. In essence, they can characterise what they have in order to better prepare for what may come”, he explains.

While the immediate focus is on genomics, Dr Rees says the first phase of the Platform’s strategy also includes the building of bioinformatics and proteomics capacity. During this initial phase, equipment investment and recruitment drives will be aligned with these areas. He adds that, being an ARC-wide structure, the Biotechnology Platform will ultimately have to build capacity to conduct research in all areas of crops, horticulture and animal production. “We will be building other elements in phases that will come over the next three to five years”, he says.

A primary goal, according to Dr Rees, is to share the technologies as widely as possible. The first step in that process is to promote a mindset shift. “We are getting the message across that new technologies are not that expensive once you have made the initial investment”. The sheer amount of data that can be produced through the use of these tools can satisfy a vast range of different purposes at a price that is accessible to each project’s existing funding. “We will have a situation where a single lab can, for instance, characterise a bacterial genome sequence at a cost of around R5000”, he maintains.

The Platform model, in itself, represents a significant shift from the way the ARC has operated up to now. With an envisaged structure consisting 80% post-graduate students and 20% research leaders, the Biotechnology Platform is moving away from the long-term career planning paradigm. “Instead of two technicians for every researcher – who will then probably go on to stay with each other throughout their careers – there will be 10 students. That way, it can rapidly become a big structure with a lot of capacity. It is only through the building of post-graduate capacity that you can build the overall research capacity to deliver on what you need to do”, says Dr Rees.

He believes that part of the Platform’s responsibility is to also draw attention to the benefits of working in this way. “We want to make sure that people can collaborate through the Platform and use high-level technologies, even without personally having the expertise in a particular technology. We will have the capacity to share, teach and train – thereby spreading the benefits of the technology throughout the organisation”; and along with the access to technical expertise and infrastructure comes increased chances of securing funding.

Dr Rees wants to see the ARC Biotechnology Platform grow to a point where what goes for collaboration within the ARC also goes for national and, eventually, international collaboration. In his opinion, this is also an aim that will need a perception shift in order to attain. “If you look at the dynamics of the way that science councils and universities in South Africa work, people constantly try to compete with each other for the same resources. But the pie is only so big, and not everyone can get a slice if you work in competition”.

According to him the key is to make the ‘pie’ bigger by securing more outside funding. He says that this means organising into a strong national team – independent of the notion of separate institutions, or even that of differing mandates. “To enhance the broader collaboration process, you need a formalised structure for working together. That’s when you begin to breakdown the perceptions of the importance of individuals and their loyalty to the organisations that employ them”.

In this regard, he likens the Biotechnology Platform and its role to the ACGT. “By brokering the collaborative process, the ACGT is moving the argument from ‘my institution’ to ‘my region’”, he says. “As it is, we are competing with each other on a very low base. If we work together, we can put together an impressive package to present on an international stage”.

With new partner organisations coming into the ACGT fold, Dr Rees maintains that the scene is being set for even bigger collaborative processes. “It’s an important development coming all the way from executive level. The increased inclusiveness will help things go forward with new energy”, he concludes.

For more information about use of the facilities at the Biotechnology Platform, contact Dr Jasper Rees.